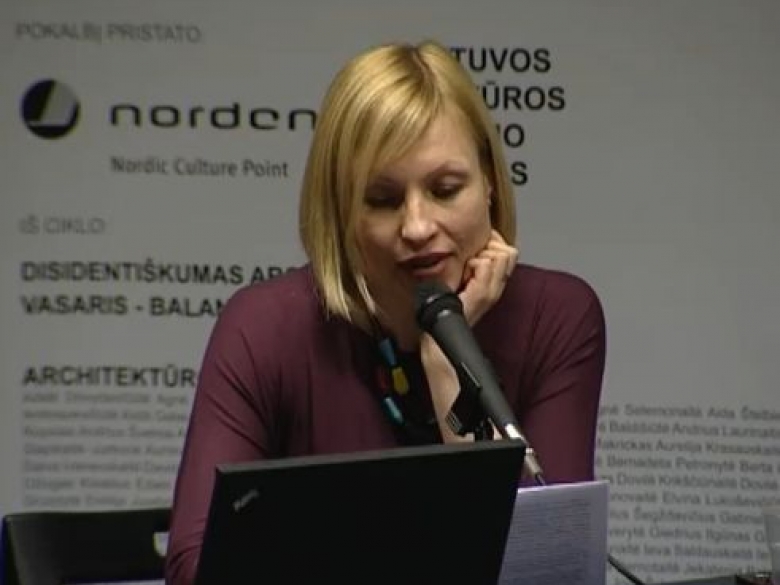 Marija Drėmaitė at the National Gallery of Art in Vilnius, 2013

I have noticed that many speakers bear a slight confusion as to whether it is dissidence they are talking about. I was very sceptical at the beginning when I heard this concept of dissidence through architecture. Today I'll try to provide a short overview of critical practices in Lithuanian architecture and it is rather difficult to talk about dissidence in Soviet architecture because it is a very controversial term. Architecture can be considered as one of the hard arts, which, along with the film industry, could not exist without State infrastructure. No one could produce a house without State institutions, State permits and State industry.

Dissidence is essential to something public – public disapproval, public negation of the dominant ideology and it is always directly connected with risk – a risk of losing something important or vital – a life, a reputation, a social position, an income, a possibility to develop. This risk requires a lot of courage. Therefore, the term critical practice is more appropriate in my opinion.

I was thinking about what it could be in the architecture of Soviet Lithuania. I have chosen three main fields where I could see points of dissidence or critical practice. And then I read a paper by Ines Weizman in which she also mentioned certain practices and found the right words to name those practices, so I borrowed those words. The first one is related to the sphere of the refusal of the State architectural system, which could be the private practice of architecture, because practicing architecture off the state institute was already a challenge. Another one would be to stay in a sphere of retreat, which could be critical practices around architecture, for example – exhibitions, events, performances, paper architecture and hidden pedagogy, including writings about architecture – architectural philosophy or theory. And finally – a conceptual subversion of the norms and language of the dominant architecture in public disagreement. Refusal is usually understood as a refusal to practice architecture at all as a form of protest against State design control. Architects sometimes refused to practice architecture and chose different fields of art or engineering, but how was it for a person who decided to maintain his architectural practice, just off the state institute? Was it at all possible and how? How was it for a person to practice that? I have an example of the Lithuanian architect Henrikas Šilgalis, who really tried to do this. It was actually possible for him to carry out this practice and to do individual designs but in very limited fields of architecture. Šilgalis received commissions to build private houses for kolkhoz chairmen or other rich private commissioners. In the late Soviet period he was employed at some kolkhozes as an architect, where he could design really avant-garde pieces, because this was the time when chairmen of rich kolkhozes started to compete among each other for the largest and most architecturally elaborate buildings, cultural houses and headquarters. However, for an architect it posed a certain risk – poor social benefits, irregular income, and the buildings were rarely realized. Architects like Šilgalis continued designing because they could not live without architecture, but their designs were very rarely constructed. It is known that kolkhoz architecture in Estonia in the late Soviet period was very avant-garde and an entire new generation of architects made their careers there. Another form of critical practice – that of retreat – included many unofficial events and performances, such as exhibitions of avant-garde art in the corridors of the State Institute for Urban Planning, hidden pedagogy and other informal practices where architects could exchange their ideas and criticize the system. For example young architects discussed, watched slides from trips abroad, exchanged Western magazines and books, or were hanging out with the architect rock band “Antis”. These actions could not be called dissidence but they did form unofficial informal ties and networks. The most interesting case study is the story of the Tallinn school in which one can follow the path from criticism to establishment. The Tallinn school started in 1978 as a platform for young architects to present their criticism of inflexible building regulations, Soviet mass construction, standardization of urban planning, and to launch a public dialogue on the role of architecture in society and the cultural sphere. After a decade they had become established architects with major State commissions.

Unfortunately, critical theoretical thought was probably the weakest point in Soviet critical practice, at least in Lithuania. Critical architectural writings in Lithuania were almost non-existent. Official criticism of architecture existed, especially in the media, but it was restricted to pointing out certain operational construction quality mistakes that could be quickly improved and fixed. For example, in the field of mass housing the monotony of facades and poor construction quality was criticised, but not the system itself.

The sphere of subversion is probably the most difficult to explain since it is deeply hidden in the small aspects of dominant ideology and informal values. An example of the Lithuanian school of architecture from the early 1960s is most commonly used to illustrate the opposition of the young group of nationally oriented Lithuanian architects to Stalinist socialist realism and introduction of Western and Nordic Modernism in architecture. The myth about this phenomenon is supported by the participants themselves. An aspiration to create contemporary, yet nationally distinctive architecture within the USSR became an important task for the young generation of architects Algimantas and Vytautas Nasvytis, Vytautas Edmundas Čekanauskas, Vytautas Brėdikis, Justinas Šeibokas, Nijolė Bučiūtė and others (born in the 1930s, graduated in the mid 1950s), who received an academic education based on the neo-classical tradition. They never supported Stalinist aesthetics, and were happy about the architectural reform which took place in 1955; however, pre-war Modernism soon proved its limits as a source of inspiration. In this context, the possibility of visiting foreign countries opened entirely new horizons. Nordic regionalism became an acceptable model for this generation of Lithuanian architects since it combined Modernist design with regional tradition and thus matched their aspiration for a national idiom. They soon became well-established leaders of Soviet urban design and residential architecture receiving the most prestigious Lenin award for the Lazdynai residential district in Vilnius (1974). Lazdynai, which had been designed as an opposition to Soviet drabness and dullness, in an attempt to introduce Western ideas eventually became not only an acknowledged example, but also a skilfully used instrument for propaganda, presenting the achievements of modern Soviet urban planning. But was it really subversion? Wasn’t it actually easy to be an opponent to Socialist realism in the late 1950s when the entire Soviet architecture called for Modernist practice and Baltic Modernism had become officially established? What form of dissidence are brothers Nasvytis talking about when they say that they “could do whatever they wanted in architecture”? Established Modernists wanted to feel like dissidents who had opposed Stalinist architecture and created the Lithuanian Modernist School of architecture. So, what could the next generation do? What methods of critique of Modernism (and Modernists?) could they practice? For example, they went back to expressing a national style through folk architecture as a way of opposition to the “soullessness” of Modernism. But it was also just another form of gaining party favour, especially for leisure architecture which might be understood as the good old Soviet doctrine “socialist in content and national in form”. Another form was an attempt at Postmodernism. But without its intellectual background, local architects mostly just copied the design. This “generation two” did not receive major State commissions – it was really lost; the architect Leonardas Vaitys described it as the “generation of orphans”.