Critical practices in the Architecture of the Baltic Region. With an introduction by LOLITA JABLONSKIENĖ 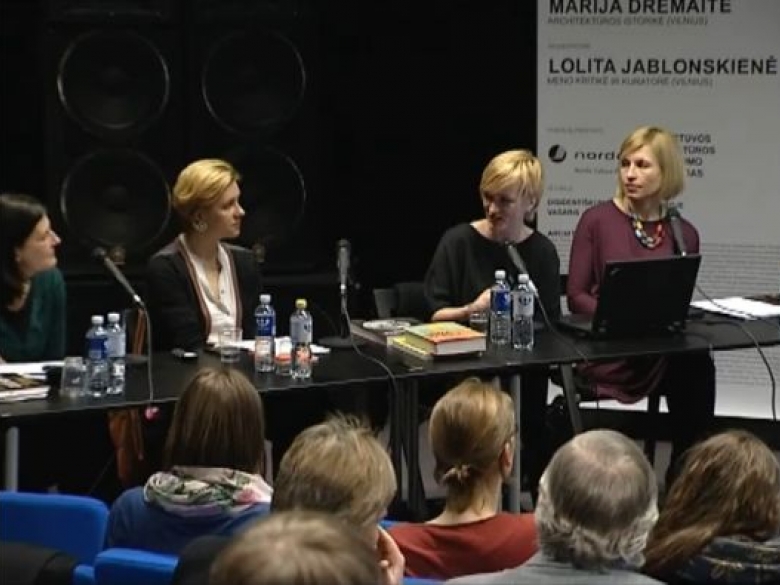 Lolita Jablonskienė. I would like to introduce our speakers of this really inspiring discussion. We have here our guest from Riga – Ieva Zībārte – who is an architect, writer and also a creative director of a company called Modernists, which puts on exhibitions, conducts research, and works in the field of architecture and design. I had the pleasure of personally seeing an exhibition that she curated on the work of the Latvian architect Marta Staņa in 2010, which was awarded with the special Latvian prize for architecture. So she’s also a curator.

Our second guest speaker is Ingrid Ruudi from Tallinn. She’s an architectural historian with an interest in critical and participatory spatial practices and urban spaces. Many of you may know her from the very interesting Estonian project that was presented in the Architectural Biennale in Venice in 2008 – the famous gas pipe that connected the German and Russian pavilions in a rather provocative way; Ingrid was the curator of this project. And in 2011 she was behind one of the projects of Tallinn as the European cultural capital: the LIFT11 project.

And our third speaker is Marija Drėmaitė who is also an architectural historian with an interest in the architectural, social and technological processes of the 20th century, both in Lithuania and the wider Baltic and Nordic region. We are very grateful to Marija, and are happy and proud that she is one of the co-authors of the long-awaited book “Architecture in Soviet Lithuania”.

Before we start talking, or the real speakers start to talk, I want to propose a few remarks to encourage the discussion. In my opinion the general subject of “dissidence through architecture” and the particular topic of today’s talk sound slightly different because these ‘boundaries of critical practices’ or ‘practicing critically in the Baltic region’ topically integrate into the present discourse of revising and rewriting general art histories as well as the architectural art histories of Eastern Central European countries. The theoretician Susan Buck-Morss has written quite recently about the post-communist condition which is usually associated with Eastern Central Europe, in that it is not only affecting Eastern Europe; it does not have a spatial but rather a temporal character and therefore describes a historic moment in which we all, she says, we are all globally situated, not just in the Eastern Central part of Europe. In other words, these communist conditions describe a historic and universal condition of contemporaneity, meaning of today. Therefore, revision or the rewriting of art history, architecture history included, is not only an issue that is urgent or topical for the countries that have freed themselves from a totalitarian regime, meaning this is not a regional issue but also a global one, a geographical but temporal issue. This, I think, is confirmed also by the approach which has been suggested by Ines Weizman, the curator of these series of talks. She chose the term or the concept of the dissident, which actually describes some specific modes and forms of being in a social political context and these modes, not always, or rather most often, do not correspond with the notion of social activism that was generated and later integrated in the West. She borrows the term dissidence from the context of Eastern Central Europe but suggests that it be expanded in its instrumentality in the global context and in various historical temporalities and also in the contemporary.

The main keywords of today’s talk, architecture as a critical practice and the boundaries of this critical practice encourage our speakers and us to embark on further discussion to highlight the events and the phenomena that were forgotten by the Soviet historiography of architecture. We could remember for instance the paradox that was formulated by the famous semiotician Yuri Lotman, himself a dissident who practiced semiotics and the theory of culture in the Soviet era, applying theories that had very little or rather nothing to do with the prominent Marxist ideology. Lotman says that when one conceives culture as a text, one should remember that new texts are created not only in the culture of contemporary time, but also in the past. During the history of culture there have always been things discovered anew, things that have been forgotten and sort of dug out or the dust has been swept from them. According to Lotman, this is the normal functioning of the paradigm of remembering and forgetting. So, on the one hand, we have an opportunity to remember certain things that have been deleted from our memory because of one or another reason. On the other, we have a chance to articulate our history with the help of the new specific critical categories, which revise not only the history itself but our thinking – the traditional academic thinking and research.

We are going to speak about the history of architecture as a practice, but not about the history of architecture as the history of objects. I believe our talk today is one of the clear examples of architectural practice which is not an object, it’s not even material if you wish. The second question to rethink – what is the critical practice in architecture in general? Would it be something that we automatically associate with the notion of avant-garde that is established in art history in general? When one understands avant-garde as a socially critical or at least socially sensitive practice? Avant-garde practice is associated with an avant-garde artist and in the case of Lithuania it would be George Mačiūnas, the Fluxus artist who was professionally trained as an architect, and who published an article entitled “The Grand Frauds of Architecture” in 1964, talking about Mies, Frank Lloyd Wright, Saarinen, and others. Is this an example of the critical architectural practice or the boundaries of understanding which is a critical practice or is it wider and more complicated than that?