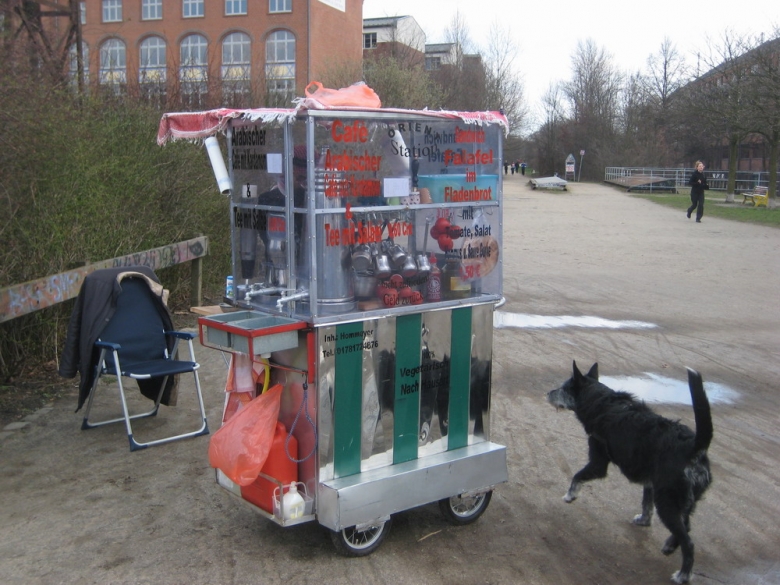 It may sound paradoxical but the biggest danger for Berlin is to become an ordinary European City. The current minor growth in population has become a nice stats-scenography for politicians to claim that another ‘New Berlin’ is about to arrive. This time, numerous start-ups, creative-clusters and biotech-hubs are going to save the metropolis and reposition Berlin as an East-West melting pot. Sounds familiar?

Beyond Berlin’s well-known megalomania and desire for a metropolitan image, the neighbourhood reality is somewhat different. Dilapidated schools and kindergartens, growing social fragmentation and destructive tourism have become rather an everyday certainty than an isolated crack in the stabile welfare system. Additionally, another set of (statistically) invisible expat communities (such as EU-periphery youth or asylum seekers), attracted by the media image of Berlin, search for niches and shortcuts in the place where ‘everything is possible’. Every European capital would like to have a flavour of Berlin, a mix of young fashionable arty people and good universities. Political elites, on the contrary, do everything to make Berlin a boring and economically stable German capital, where facades are clean and the metro runs on time. Significantly, conflicting pictures of Berlin as a proletarian city without an identity and Berlin as a modern cultural metropolis1 continue to be important prerequisites for multiple readings and experiences.

Berlin and the ‘Worst Practice’ Continuity

A variety of urban development interruptions, such as the destruction of WWII and The Wall, have been additionally extended with other breaking points such as speculative financial activities (the Bankgesellschaft scandal) and retrograde reformulations of heritage (the Humboldt Forum and the symbolic removal of Palast der Republik), keeping Berlin hard to grasp and impossible to fix. Those structural disasters have maintained internal tension between traditional political elites and ordinary citizens who are usually much more interested in district politics and direct action. Berlin seems like a continuum of radical turns; political, economic and social breaking points have reshaped the cultural landscape and spatial planning significantly. The old national drama of rebuilding Berlin in the spirit of ‘critical reconstruction’ was recently augmented with a new episode in which the internationalization of Berlin plays a much bigger role than the question of traditional street patterns and building height. Nordic and Japanese pension funds are buying whole blocks, more and more companies are moving their HQs to Berlin, and the number of international students is rapidly growing. The exponential growth of tourists per year is not news anymore. The production of symbolic forms2 and hype export have slowly become the dominant communication strategy of the city authorities, justifying city marketing with the amount of overnights per year.

Looking briefly into the history of urban megaproject failures and other forms of ‘Worst Practice’ Governance,3 one can see two unsuccessful IBAs ‒ the creation of quasi-urban nodes and sites of consumption such as Potsdamer Platz4 and the unfinished BBI Airport. It seems that productive coherence between economic, social and political actors5 was never Berlin’s strength. Although some islands of progress exist, they are in danger due to the situation of continual uncertainty and flux, currently driven by real estate logic property speculations.

In the shadow of megaprojects, the tourism boom and real estate speculations, diverse grassroots initiatives have found fertile ground for experimentation and DIY urban development. Settled in the cracks of urban development, this unusual biosphere of artists, micro-entrepreneurs, activists and students, have been experimenting with new forms of co-living/working, independent cultural production and new forms of politics. Roughly speaking, we can crystallize three main periods in which urban pioneers developed diverse tactics in dealing with formal urban development. 1. The fall of the Berlin Wall until 2004 / the wild 90s in Berlin were characterized by the discovery of the temporary use of spaces, due to the spatial surplus and lack of authority. This makeshift city inside the reunified German Capital brought to light new modes of spatial appropriations and socio-political engagement an entirely new generation of urban actors, mostly from the domain of subculture (predominantly club culture). Self-confidence, professionalization and media attention were the main achievements of that period.

2. 2005–2010 ‒ after the consolidation of the state apparatus and the first results of the district’s administrative restructuring, in which a decline of spatial surplus was a consequence, new coalitions between urban pioneers and property owners emerged. Diversifications of uses and micro-economic activities were recognized by authorities as a way of bridging the gaps in urban development without investing much of their own resources. Parallel with the recognition of taxation potentialities, pioneer’s strategies inspired many civil sector actors willing to more actively use available funds such as SozialeStadt. The already existing Quartiersmanagment, as a planning instrument aimed at increasing social cohesion and empowering the marginalized, unfortunately became a tool of the educated middle class focused on a creative economy and new services, which further put in danger small-scale business, unemployed and migrant communities.

3. 2010–present ‒ the final recognition of pioneers and their involvement in plans such as StEK2020 pose the logic question of who are the pioneers of nowadays, having in mind the changed circumstances in which Berlin finds itself. Although instrumentalized Urban Pioneers (Tempelhofer Freiheit) became rather the norm, there is a strong diversification of DIY actors, neighbourhood initiatives and international grassroots networks interested in Berlin. Also, the definition of urban pioneers has been extended and can include the mayor of a district, youth organization or social-entrepreneurs. ‘Careful Urban Renewal’ and a Crisis of Participation

‘Careful Urban Renewal’ developed during IBA 84 triggered a discussion about participatory urban development, together with the social, ecological and economic tools needed for achieving a productive relation between master-planning and grassroots initiatives. It partly helped resolve the housing crisis and established some mechanism of how to deal with the squatting movement, but in general it opened a huge field of possibilities for acting bottom-up. Since then circumstances have changed on both sides. Not just that public funding is limited, an attempt to transfer communal state responsibilities to citizen’s initiatives (cleaning, for example) is clearly visible, justifying it as proactive citizenship. Furthermore, grassroots initiatives formed new alliances, sometimes even political ones, and totally changed the media landscape with the help of affordable technology. Neighbourhood politics became much more intensive due to the clear signs of the gentrification and privatization of the public sphere. The local district mayor became an important figure, balancing between the politics of the Berlin Senate and local particularities.

However, current participation models are not really suitable for the complexity of the contemporary moment, which is characterized by the multiscale interdependences of the global economy, cultural production and public policies. Participation became questioned not just by critical scholars, but also by citizens, underlining the lack of transparency, rather informing on character than co-creation or even the exclusion of particular communities. More often than not participation is just a staged event for an alibi-involvement and part of the ‘renewal’ on the costs of the weaker part of the society. The marginalized community itself hardly understand the over-bureaucratized urban planning procedures and have no capacities (mostly time) or tools to express their needs beyond complaints. Growing awareness of self-organized actors and their constellations, not only at the neighbourhood level but also as a network of many localities (the Weltstadt project initiated by Goethe Institute, for example), shows the vital interest of the academic community to study the multifaceted interrelations of local agents and the specifics of the urban fragmentation in other cultures. Looking into the parking problem at the district level from the perspective of social sciences could potentially say much more than colourful urban planning maps ‒ explaining the development of tourism (on a regional level), the change in commuting culture (a combination of car and public transportation) and the respective social change (families with kids and a car moving into the district). Above that, there is a current popularization and multiplication of urban studies programmes, ranging from urban geography to lifestyle studies. This trend also accelerates the production of new professional identities, spaces of work and modes of self-organization. Since district authorities and their instruments (Quartiersmanagement) are no longer able to follow the velocity and nature of change, simultaneously with grassroots actors not being able to find stabile ground for their projects, new forms of cooperation are needed. Co-production, both of ideas and spaces, suits the current situation much better than the classical participation models designed mostly in the 1960s and 70s. The Moabiter Mix project was developed in an attempt to deal with the intensive transformation of typical Berlin districts caught in strong deindustrialization, with a high percentage of migrants/the receiver of social help and real estate pressure. By using the ‘theory of the communicative construction of space’ which makes a connection between acting, knowing and communicating,6 the project looks at the key reasons for social exclusion and the opportunity for recommunicating with stigmatized communities and their spaces. Moabiter Mix represents a revival of the local characteristic (Berliner Mischung) containing work and living in the same district, this time adding a cross-sector collaboration experiment between local authorities, micro-entrepreneurs and independent cultural institutions. The main idea is to invite citizens to reappropriate a recently opened park and one of the rare public spaces in the district by using innovative cultural formats. This cooperation uses a subversion of popular ways of coming together (watching football, a market, eating/cooking together) and puts disconnected communities (park users) into unpredictable situations and new socio-economic relations. These cultural interventions serve as a trigger to establish various horizontal relationships and common interests that could eventually evolve into a structurally solid organizational model. For example, bridging the craftsmen community with local artists and academics and putting them in a kind of tandem relation during the market could lead to their involvement in organizing the market the following year, this time with more power and responsibilities.

Delegating power is thus seen as a step-by-step process in which local actors can design urban change instead of being part of prefabricated models, usually created by interest groups disconnected from daily reality. Finally, rediscovering new forms of activism at the local level seems to be a very important questions in the current post-political conditions,7 knowing the elasticity of a neo-liberal city and the growing possibilities for direct action in the situation of state weakness. 6. Christmann, G. (2006), ‘Urban Pioneers’ and their Social Networks – A Remedy Against Social Exclusion in Urban Neighbourhoods? The Case of Berlin-Moabit.

7. Swyngedouw, E. (2009), The Antinomies of the Postpolitical City: In Search of Democratic Politics of Environmental Production. International Journal of Urban and Regional Research 33.3.