Liina Jänes. Position Of The “Other”: The Architecture Of Valve Pormeister 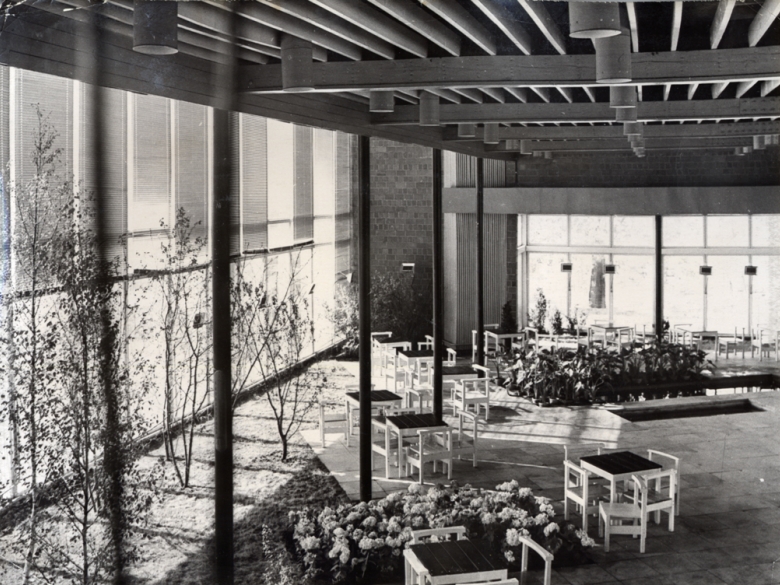 Exhibition in the Flower Pavilion, 1960

Valve Pormeister (1922 – 2002) has a solid position in the Estonian architecture of the 1960s and 1970s. She sparked immediate attention with her first building in 1960 and enjoyed a successful career from that time, gaining the admiration of both her colleagues and functionaries.

The question of this essay, however, is not to exhaustively portray the architect. Her contribution to Estonian postwar architecture has never been forgotten or underestimated.1 I would rather take the opportunity to follow some specific aspects in Soviet Estonian architecture that her buildings and success story visualize so well. First, the beginning of her career as an architect coincided with the post-Stalinist upheaval in Estonian architecture. In the situation where changes were initiated from “above” and expected from “below”, her different educational background as a landscape architect turned in her favour. Second, her unprecedented success triggers an interest to look into the reception of her architecture.

Position of the “other”

Pormeister’s creation provides an opportunity to research the architecture that was made from the position of the so-called other. She was trained as a landscape architect in the State Art Institute between 1946 and 1952,2 after studying agriculture in the University of Tartu for two years. There was no demand for landscape designers in the postwar years, but there was a shortage of architects. Thus, the department of landscape design was closed in 1951 and Pormeister was assigned to work as an architect at the State Design Institute Eesti Põllumajandusprojekt,3 which designed for rural areas. What she lacked in professional architectural education, she made up for with her ambition-driven self-education, and she managed to gain unusual success in both disciplines – architecture and landscape design, often combining the two in her works.

Besides having a different educational background, or rather deriving from the fact, she came to represent a more artistic and natural dimension of postwar modernism that spread alongside normative architectural Esperanto, industrialization and standardization. Regional modernism, which was fashionable all over Europe, was influenced by Scandinavian architecture and interior design, and the Soviet Baltics were no exception. In the Estonian case, there was considerable influence from Finnish architecture. Ideas were grasped from foreign magazines, study trips and personal contacts. This softer side of Soviet modernism is well manifested in the surprisingly many individual designs, including several by Pormeister.

Her first building, Flower Pavilion (1958-1960) was in many ways a signpost for new architecture in Soviet Estonia. The building beautifully combines rational volumes with natural relief, accentuated by natural materials. Its unexpected entrance is designed as a series of cubical volumes climbing up the hill. The placement of plants on both side of the glass wall created a flexible transition between the interior and exterior. After the pompous Stalinist style these characteristics – sensitivity towards context, intimate scale, and transparency – had not been applied in public buildings.

Six years later Café Tuljak (1964-1966) was built as an extension to the pavilion. Although they are close to one another temporally and physically, these two are joined together on the principle of contrast. Almost free of load bearing walls and dominated by dark horizontal wooden cornice, Café Tuljak represents minimalist right-angle aesthetics, hidden behind the closed image of the surrounding landscape.

Pormeister’s Administrative and Research Centre for Kurtna Experimental Poultry Farm, built in 1966, became a true manifestation of the era. Besides the carefully planned whole of the exterior and interior space and picturesque location, it had exemplary execution under Soviet conditions. Inside, Pormeister managed to create the spatial effect of a small church. According to interior architect Vello Asi, the main hall only needed church-like pews to complete the image. Here, Estonian architects’ admiration of Finnish churches and chapels was transformed into a legal building type of Soviet reality – a modern agricultural institution with a hint of science.

For Pormeister, the tools of postwar regional modernism were as much about the drive to be up to date as they were immanent for her. Stressing the integrity of the building and landscape, for example, was the very basis of her architectural thought and shaped her signature style. It was characteristic for her to design the landscape as an exhibition and to treat the building as a work of art inside this exhibition.

Soviet modernism research and published material has been in vogue both in Western Europe as well as in the former Eastern Bloc itself.4 In many cases, the focus has been on unusual, almost extra-terrestrial buildings, and monumental dimensions in the cityscape and landscape. Against this backdrop, Pormeister’s career started out with rather small buildings, blending in with the landscape instead of extending over it. Her top edifices of the 1960s are intimate, almost marginal in the context of Soviet grandeur in terms of scale and function: pavilions, cafés, private residences etc.5

In the case of the Flower Pavilion, its experimental form has been claimed to be possible because its function was beyond the sphere of interest of the prevailing ideology. After all, it was just a greenhouse. However, this greenhouse sometimes attracted 5000 visitors per day and was widely published in the Soviet Union and abroad.6 In fact, the pavilion was built as a part of the year-round model garden to celebrate the 20th anniversary of Soviet Estonia.

Most of Pormeister’s early creation was exceptional, nevertheless exceptions in Soviet spatial control needed political support. Pormeister’s career took off under the patronage of the Minister of Agriculture Edgar Tõnurist. Tõnurist was the man behind the commissions of the Flower Pavilion, Café Tuljak, the Kurtna centre and several of her later buildings. This is not to hint at the architect’s flirt with power, but at the inner ambivalence of Soviet reality. For example, the Kurtna centre, which set a new standard in architectural circles and gave rise to the phenomenon of Soviet Estonian rural architecture,7 could only be built after obtaining money and special permission for a one-off design from Moscow. At the same time, these model houses were needed and openly exposed by the regime as part of the national modernization policy.

As the first powerful example of modern architecture in a rural setting, the Kurtna centre remained an object of admiration and imitation in Estonia and the Soviet Union. Delegation after delegation came to view it. Black and white images of Kurtna with its white horizontal lines and Chaikas and Volgas parked outside divert the attention from the fact that this was actually a mere administrative building of a poultry farm. Carefully chosen images were used to spotlight the outstanding achievements of Soviet agriculture. Some photos of Kurtna from the 1960s have a comment on back: “negative in Moscow”.

In short, Pormeister’s creative thought received extraordinary recognition: prizes, articles, and commissions from other Soviet republics to have specifically her as architect.8 For the first time, Soviet architecture got a name tag. In 1972, on the occasion of her 50th birthday, she became the first architect in Soviet Estonia to hold a personal exhibition. It was held in Flower Pavilion alongside a flower exhibition which she had designed herself.

In Estonia, the debate about the values of the 20th century architecture started to wane in the 1990s and culminated in 2006-2007 when the former Political Education Centre for the Estonian Communist Party (Sakala Centre, 1982-1985) was torn down in Tallinn city centre. Regardless of the 10,000 signatures that were collected in favour of keeping the only twenty-years-old Sakala Centre,9 it was demolished. It became clear that not only is our recent architecture largely unrecognized but recognising it is also exceptionally complicated. The reason for this is that recent history is not easily perceived as heritage, and especially Soviet architecture, which has ideological as well as complicated personal connotations. A glimpse at the national register of listed buildings reveals our distorted self-image – we have almost successfully avoided the fact of 50-years of occupation.

Filling this gap had started a few years earlier, when in 2004 the National Heritage Board took the first methodical step and had guidelines written on 20th century Estonian architecture. This was followed by the programme “Mapping and analyzing valuable 20th century architecture in Estonia”, initiated by the Ministry of Culture and the board.10

Surprisingly enough, long before the shift towards the protection of modern heritage was yet to come, in May 1997 both the Flower Pavilion and Café Tuljak were listed as national monuments (in the lifetime of the architect). Four more postwar modernist buildings were listed in same decree11 and two from the Stalinist era. Another one – Kurtna administrative centre – was listed in 2001 with a specific title declaring the attributes of the object – “Kurtna Experimental Poultry Farm with the original interior and landscape design as part of the ensemble”. The results of the abovementioned programme are yet to be implemented but they foresee at least some more of Pormeister’s buildings being listed.

Such early reference in the national register towards the buildings designed by Pormeister only demonstrates the strong semantic field of her preeminent objects. Although the blooming of individual designs in collective farms was praised by her contemporaries, it was also later criticized as being elitist. Surprisingly, this never affected the reception of her buildings. Pormeister was already a classic of Estonian postwar modernism. In fact, as a researcher, when arranging her archive in the Museum of Estonian Architecture, and curating an exhibition on her, I found no critical notes whatsoever. In turn, the reception of the exhibition only confirmed her star-like status. 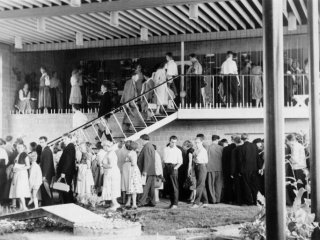 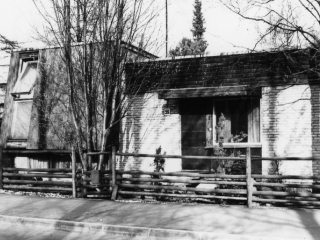 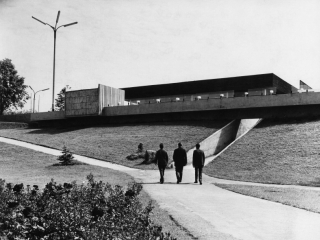 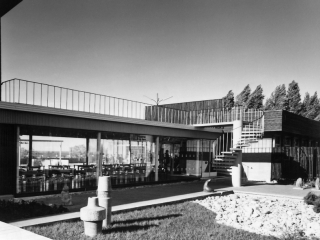 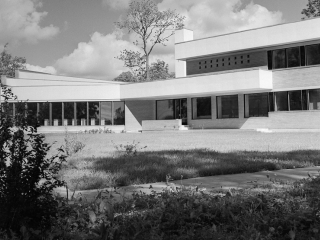 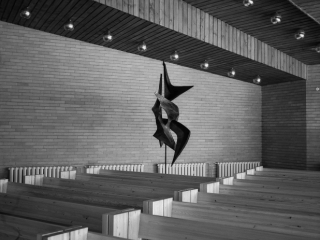 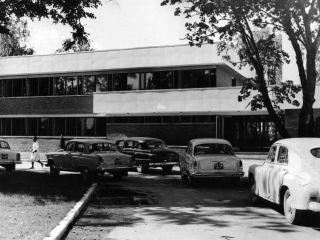 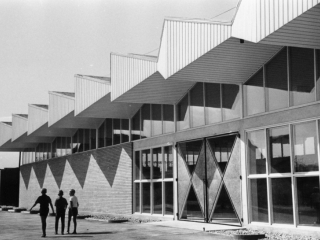 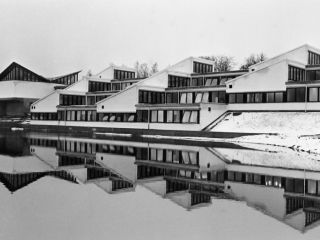 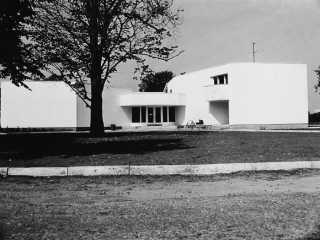