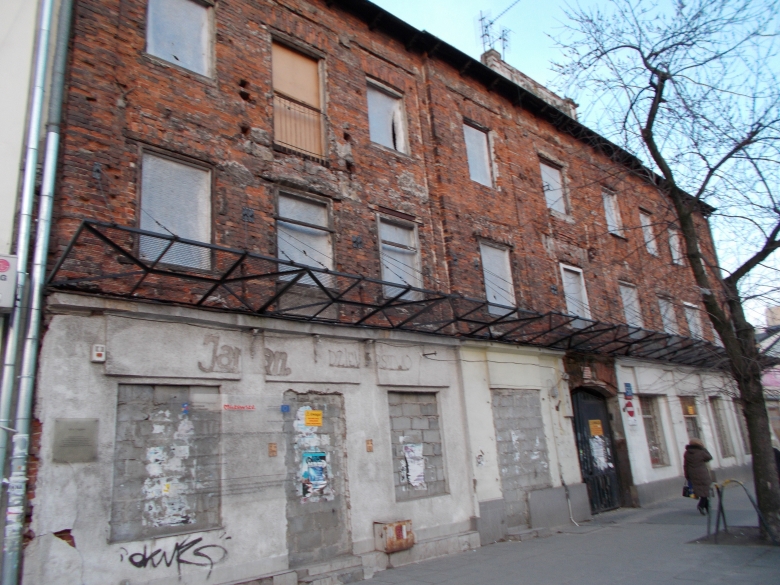 Warsaw’s Praga District, Targowa 56, from the side. Photo: Benjamin Cope, 2014

In this paper, I combine an analysis of the Praga district of Warsaw with a reflection on the role of breaking points in urban spaces. In making this argument, I examine the role of breaking points in digital and smart city technologies. The ideas developed here will draw on the work of Bruno Latour, and consider how his project for a reconsideration of modernism might be applicable to urban spaces in Eastern Europe.

Historically, the Praga district on the east side of the Wisła River in Warsaw has always existed in a state of delayed development in relation to the city centre located atop the scarp slope to the western side of the river. Under and after socialism, this pattern was continued as these contrasting political formations both focused on remoulding the city centre to fit the prevalent ideological architectural norms. Praga’s proximity to a rapidly developing city centre has in recent years seen the pressure, which seemingly must cause radical change, intensifying. This existence of a social and urban infrastructure in the face of imminent change  led us to  characterise the district as being in a situation of 'precarious urbanism'.1

From the mid 2000s, a number of events have occurred each of which it seemed would be the breaking point that would bring about qualitative change in the district: the arrival of artist studios into disused real estate, followed by the appearance of a number of trendy bars; the revitalization of the facades of a number of buildings through European structural funds; the activities of a populist and culturally active local councillor; the reconstruction in the district of the national stadium for the Euro 2012 football championships; the commencing of major post-industrial housing investments at the Koneser vodka factory and  the Port Praga sites; and most recently the construction of the 2nd metro line in Warsaw to be opened in autumn 2014. Despite all these portents, however, the situation in the district still seems to be that of precariousness in the face of an ever more imminent breaking point. This situation of precariousness is exemplified by the photograph above. Here, a plexi-glass notice is visible on the wall of an abandoned tenement building announcing that the city of Warsaw has received support from European structural funds to transform this building into a 'Warsaw Technological Space: The Creativity Centre at Targowa 56'. Despite the fact that these funds were obtained in the frame of operational programmes from 2007–2013, the only evidence of this project in 2014 is this informational board, which itself is set over a smaller yellow notice announcing the danger that the building may collapse. Thus, on one notice, information about an as yet not existing project (as though it already existed) and, on the other, information about the danger of imminent infrastructural collapse. Thus, the same space seems threatened by two impending but very different breaking points. These two contradictory visions of imminent change form a concentrated expression of my difficulty in calibrating the process of urban transformation in Praga, and thus motivated me to reflect on the issue of breaking points more widely. In considering the phenomenon of the contradictory notices and their opposed visions of breaking points, I propose to reflect on the changes being effected by digital technologies. Advances in digital technologies are enabling the more and more precise and diverse measuring of quantitative data to improve and render more complex our understanding of our surroundings. The mobile phone application pictured in fig. 'Mobile Phone Sleep Application' enables a fuller understanding of patterns of sleep by being placed in the bed and recording the movements of a sleeping body. Through the measurement of the changing patterns of these movements, the application is able to calculate different phases of depth of sleep and compute sleep efficiency. Thus, sleep turns out not to be just sleep, but a more diverse phenomenon which can be monitored and thus potentially improved ‒ the application can wait to wake the user at the most appropriate moment, i.e. when he or she emerges from deep sleep. In this paradigm, breaking points emerge as very important: they are the threshold at which a quantitative statistic (the number of movements of a sleeping body) becomes infused with qualitative meaning ‒ the sleeper has entered a different phase of sleep. If this logic is transposed to the level of a city, then the outcome might be something like the City Dashboard project developed at University College London.2 Here a range of data about various features of the city, weather, transport networks, images from road cameras, information about financial markets and the use of the electricity grid are uploaded in real time. What is striking here is the range of information provided and the diversity of urban space as it emerges from this project ‒ contemporary cities are complex entanglements of energy grids, weather, financial markets, etc., rather than simply physical spatial forms. Yet, there is an uncertainty involved in taking this quantitative data and computing it into information about urban space, particularly striking in the case of the 'Mappiness' rubric. 'Mappiness', a coagulation of map+happiness, displays the mood of London based on the responses to an ongoing digital survey that are compared in their statistical variation with longer term trends and the rest of the country. While one might, with good cause, be sceptical of the reliability of the 'mappiness' coefficient, the attempt to quantify the mood of a space does raise an interesting question about the way data is produced, used and put into circulation within contemporary cities. For while “mappiness” may be the most striking example, in fact all the data sets are made possible by an interesting mix of complexity and simplification, of technical precision and everyday practices (who, when, where and how the measurements are taken), of quantitative and qualitative assumptions, of breaking points and approximation involved in the production of information about a city.3 Bruno Latour and Emilie Hermant’s project explores Paris: Invisible City through precisely such a lens of the networks, simplifications, passages and transformations of data necessary for the functioning of a city.4 Latour and Hermant’s project argues that Paris is invisible because no photograph, and not even a real time data dashboard can render a city visible. Rather any view of the city is partial (a point reinforced by the interlaced sequences of fragmentary images, maps and texts on the project’s web version). The praxes involved in measuring, be they meteorological, traffic circulatory, those of establishing the price of cabbages at a market or those involved in buying a coffee, ignore a great deal and it is because of what is ignored, as well as what is seen, that any process of measurement is able to provide data. This data is then transferred and transformed through and across varieties of networks to produce the circulating information that allows city life to function ‒ me and thousands of others boiling the kettle appears as data to an electricity provider potentially further transformed into other movements necessary in order to enable the production of more electricity, or avoiding this and buying a coffee in a café involves the transformation of coins into a receipt that will itself be transformed into a café’s report to a tax office, etc.

Two aspects of Latour and Hermant’s argument are important here. Firstly, that the most important feature of digitalization is not the making visible of the city as it ‘really is’, but rather a foregrounding and pluralization of the diversity of networks, materialities, infrastructures and everyday processes through which life is produced. The point is of fundamental importance as the mistake of the moderns, according to Latour, was to be convinced that they actually had contact with the real world through science, while despairing that this contact was really possible, since it is science that has created the world as a spectacle.5 For Latour, this is a false dichotomy ‒ the world is both produced and real. This leads to a second point, that it is the tracking of the establishment and the functioning of networks, of the “passes” and mediating factors through which information is produced and transformed, that is crucial to a regrounding of research into how spaces function. I find Latour’s proposition immensely stimulating, but wonder about a rather different play of visibility and invisibility in post-socialist modernist cities. For, to return to the example of the non-existent creativity centre on Targowa Street, the networks involved here do require study in order to build a picture of how these signs came into existence: they involve the processes through which European level political directives are realized in financing particular types of investment and the non-financing of others in this district of Warsaw; the networks established by one of the vice-presidents of Warsaw, who was previously head of the city bureau for securing European funding; the practises through which ideas about creativity in urban space spread internationally, in this case through a British Council sponsored discussion promoting the creative mixer project in Praga; the processes of heritage designation of architecture in Warsaw, and the consequent obstacles and practices of circumvention of these in urban development; the networks of the social fabric of the district; and the processes of material disintegration of the architectural infrastructure. These networks are all extensive and require patient study, but in essence the methodologies for so doing can be similar to those proposed by Latour.

The great difference here is that the sign we are dealing with has no referent. Apart from the sign on the wall and the description of the project on the internet, at the time of writing there is no other indication of whether or not the project will come to fruition. In a sense, seen through a Latourian lens this is an advantage ‒ it is when a computer program breaks down, a heart ceases to beat appropriately, or a transport system fails that we have the clearest view of the complex interactions between heterogeneous components that allow networks of technology, the body or cities to function. However, on another level, if the networks fail to function as often as they seem to in post-socialist urban spaces then how can urban theorists build meaningful conceptual algorithms to understand patterns of urban change? In other words, is it because there are too many breaks in the networks that the breaking points in Praga seem to be both imminent and infinitely deferred, or perhaps they have already happened and simply their consequences are taking time to play themselves out?

1. Cope, B. (2010), Report from Praga: mega-plans, micro-modernisation and precarious urbanism, Journal of Architecture, 15/1 (2010): 101-116. Thanks to Siarhei Liubimau for the proposition of this term to describe the situation in Praga.

2. Rob Kitchin discusses this example as part of his reflection on smart urbanism in: Kitchin, R. (2013), The Real-Time City? Big Data and Smart Urbanism. Available at SSRN, http://ssm.com/abstract=2289141.

5. See the collective internet investigation in alternatives to modernist thinking led by Bruno Latour, An Inquiry into Modes of Existence, available at http://www.modesofexistence.org.